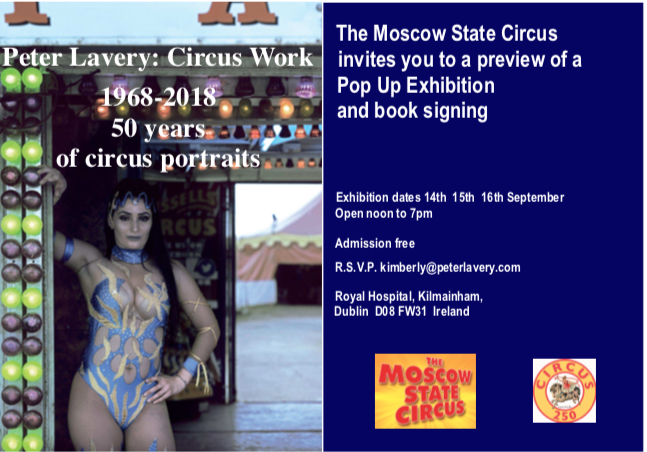 For anyone who has ever dreamt of running away with the circus or simply wondered what life is like for the jugglers, clowns, and acrobats, a pop up exhibition in the grounds at the Showground in Curraheen, in Cork by acclaimed photographer Peter Lavery captures what goes on behind the scenes at the Big Top.

The Exhibition was recently at The Royal Hospital/IMMA grounds in Kilmainham Dublin, the exhibition was very well received.

Peter Lavery has spent the last 50 years following and photographing circuses the length and breadth of Britain and Ireland (see notes to editors). His new book, ‘Circus Work’, is the first to document this five-decade-long project and is showing at The Moscow State Circus from 21st to 30th September 12-7pm admission is free 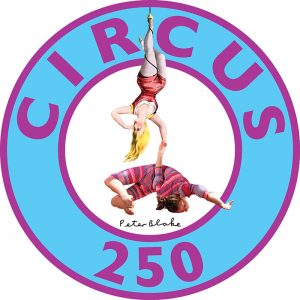 Taken in both black and white and colour these intimately detailed, large-scale photographs show circus performers relaxing while off duty, practicing, getting ready to perform, part made-up and costumed, and revealingly off-guard.

Lisa Gee director of The Harley Gallery said: “Peter Lavery’s pictures capture a world unknown to most of us. He takes us behind the curtain to see the grit amidst the glamour, the contrast between the mundane and the magical and reveals the hard work and humanity of this unique community.”

The son of a miner, Lavery has developed an enduring interest and passion for his subject since dropping in on a small indoor circus in his home town of Wakefield in 1968: “I was immediately struck by the disparity between the outward exoticism, the finery, the sequined costumes, the plumes, the elaborate display and backstage ordinariness. At once I was enthralled by the sounds and the smell, but I had no idea the subject would capture and hold my imagination for the best part of five decades.” 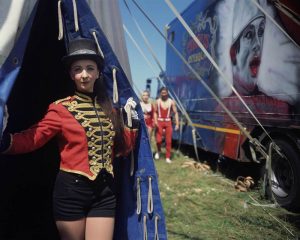 Lavery’s 1996 photography book ‘Circus Work’ is considered one of the most important examples of human and social documentation produced in Britain. Bruce Bernard, former Picture Editor of The Sunday Times Magazine, said: “These pictures by a master photographer, could stimulate people to seek out the circus and enjoy it again, sometimes long after they thought they had done so for the last time.”

Peter Lavery was born in Wakefield and attended the art school there from 1962 until 1966 and from there he went on to gain a degree at Liverpool and Leeds Art colleges, completing his studies at The Royal College of Art in 1972. 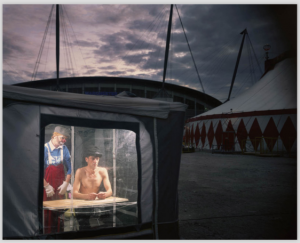 He taught special projects and alternative processes at The RCA and at The London College of Printing; making the first platinum print in Britain since the 1930’s. He has won major British and international awards as a photographer, both for his editorial and commercial work, which have included campaigns for leading consumer brands world-wide. Since 1975, Lavery’s work has appeared in the colour supplements of The Times, The Telegraph, The Observer and The Independent and in such periodicals as Vogue and Tatler.

The anniversary of this most pervasive, popular, born-in-Britain art form will be marked in 2018 by a UK-wide celebration. Museums, filmmakers, designers, theatres, orchestras, schools, libraries and circuses will all join in – circus is everywhere and for everyone.

Circus250 is about enabling pioneering work, forging new partnerships, building new audiences and embedding circus at the heart of our culture – in the ground-breaking spirit of Astley.

Circus250 has been chosen by The Economist magazine as one of the top ten trends in its 2018 Yearbook (rivalling Putin, Trump and cyber hacking) and highlighted in this fabulous short film –Economist on 250 years of the circus.

sits The Harley Gallery, an award winning art gallery where contemporary exhibitions are

Peter Lavery: Circus Work 1968-2018
A new book and exhibitions coinciding with Circus250 – a celebration of the 250th anniversary of British circus in 2018. 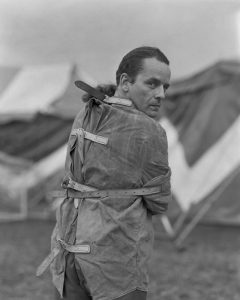 The Observer ‘Sawdust, sequins and a life of photographing the big top’